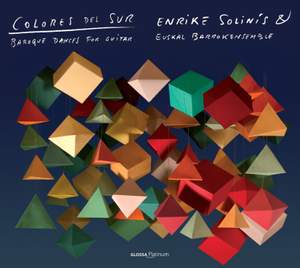 The new stream of performers coming from Spain, interested in addressing music from the past, is as equally determined to show off its improvisatory skills as it is to demonstrate its knowledge of the “score”; both attributes available in abundance on the first recording on Glossa from guitarist Enrike Solinís. With his Euskal Barrokensemble, Solinís – raised in Bilbao and largely self-taught on plucked instruments – he displays a creative openness to other musical genres and styles and a lack of reverence for interpretative certainties.

The result is a captivating collation of marionas, canarios, cumbés, jácaras, fandangos and passacaglias drawn from the Spanish and Italian Baroque traditions. Music by Sanz, Santiago de Murcia and Kapsberger provide the starting points on this new disc, along with musical ideas from Domenico Scarlatti and a makam as compiled by the Moldavian prince-philosopher Dimitrie Cantemir (which sees Solinís also performing on the lavta).

However, Solinís and his colleagues overlay all this music with 21st-century sensibilities, alive to inspiration from all corners of the globe, not just Europe, and not least Andalucía.

The risk-taking adventurousness of Colores del Sur comes, perhaps not surprisingly, with coproduction work from Fahmi Alqhai (whose 'Rediscovering Spain' album was released by Glossa recently), another unquiet musical spirit from Spain questioning the basis of playing music from the Baroque and before.

fun, and very entertaining … quite charming … an imaginative CD performed with panache and impressive virtuosity.