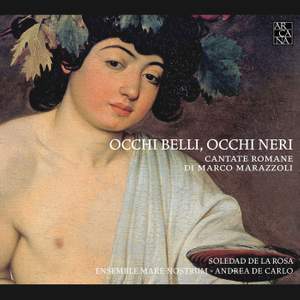 Ensemble Mare Nostrum's appealing performances of seven more cantatas merely skim the surface of a huge amount of Marazzoli's music languishing in the Vatican library waiting to be given the... — Gramophone Magazine, April 2014 More…

One of the most productive and versatile of Italian composers, Marco Marazzoli is remembered today principally for his part in the development of Roman opera. Or maybe not even that, seeing that his output is represented in current record catalogues by only a few scattered entries, amongst which the recording of La Fiera di Farfa by Vincent Dumestre (Alpha 172) is the most significant. And yet Marazzoli, who lived in the shadow of three great popes, is one of the most significant Roman composers of the mid-seventeenth century.

Besides which, his compositional skill, the originality of his style and the freshness of his melodies put him on a par with the greatest names of the Baroque era.

For his debut album on the Arcana label – after three successful recordings issued on Ricercar and Alpha – Andrea De Carlo and his Ensemble Mare Nostrum explore one of the most noteworthy areas of his output: the secular cantata.

The scale of his production (379 items!) places Marazzoli among the big names in the history of the genre. The characteristics that distinguish these works are the stunning originality of the melodic lines that anticipate the great arias that will appear years later, and a great variety of form, style and subject. A good singer himself, he probed the vocal skills of the performers, which is why his music requires a sophisticated vocal technique for works where legato, coloratura, and extreme textures combine to delight the listener.

Ensemble Mare Nostrum's appealing performances of seven more cantatas merely skim the surface of a huge amount of Marazzoli's music languishing in the Vatican library waiting to be given the attention it deserves.