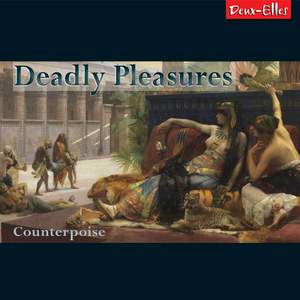 The art of melodrama in its original sense, as a spoken text accompanied by music, is alive and well...[Actaeon] is a brilliant concert-hall entertainment with an ideal role for Eleanor Bron. — BBC Music Magazine, June 2014, 5 out of 5 stars More…

I. The Spider and the Fly

Counterpoise is a highly acclaimed ensemble consisting of some of the most sought-after instrumentalists in the UK. It was formed in 2008 to give the first performances of ‘On the Edge’ by Edward Rushton, with the aim of crossing musical genres, exploring the relationship between music, poetry and visual elements, and seeking also to develop aspects of narrative and other extra-musical influences. The ensemble has since then commissioned and premiered works by several leading composers, including those on this recording.

Counterpoise has appeared at the City of London, Buxton, Cheltenham and Newbury Festivals, as well as other signifi cant venues up and down the country including Kings Place, London, and St George’s Brandon Hill. Through incorporating spoken narration into their programmes, Counterpoise have resurrected the forgotten genre of melodrama. The medium of spoken narration and musical accompaniment was taken up, often within larger works, by Schoenberg, Stravinsky, Weill, Walton and others. Of the works commissioned by Counterpoise from leading composers of our own day such as John Casken, David Matthews, Edward Rushton, Charlotte Bray, Jean Hasse and Ross Lorraine, some reinvent the genre of melodrama, other fuse music with film or video in innovative ways.

This début disc presents four representative examples from the repertoire we have fashioned for ourselves, including two of our commissioned ‘melodramas’.

The art of melodrama in its original sense, as a spoken text accompanied by music, is alive and well...[Actaeon] is a brilliant concert-hall entertainment with an ideal role for Eleanor Bron.

Casken has dramatically embraced and revivified the technique of melodrama...At almost half an hour this is a substantial work but it is not a minute too long: its narrative thread is vividly characterised and luxuriantly enunciated by Donald Maxwell...Counterpoise come across as an ensemble at the top of their game.

Counterpoise is an unusual though vital ensemble (violin, saxophone, trumpet and piano), favouring melodrama, that enlists speakers as soloists...Both scores come over as colourful and alert.

not an easy genre but made fascinating by powerful texts and excellent narrators, quite aside from the quality of the music.