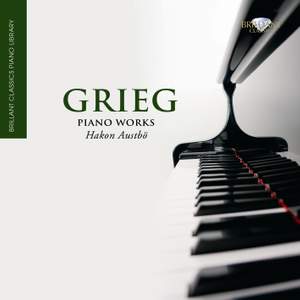 No. 3. In my native country

No. 6. Wedding Day at Troldhaugen

No. 4. Evening in the Mountains

No. 2 in F Major: Allegro espressivo

No. 12. Solfager and the Snake King

No. 15. The Last Saturday Night

No. 21. The Woman from Setesdal

No. 2. It is the Greatest Folly

No. 6. Cattle Call and Lullaby

No. 10. Tomorrow You Shall Marry Her

No. 3. Wedding March from Telemark

No. 4. Halling from the Gnome's Hill

No. 10. Knut Lurasens halling I

No. 14. The Goblin's Wedding Procession at Vossevangen

No. 15. The Bride from Skuldal

No. 17. The Maidens of Kivledal Gangar

No. 6. The Lad and the Lass on the Barn Floor

The majority of Grieg’s Piano Works, played by his compatriot, Norwegian Hakon Austbó - Received great reviews, among which a Diapason d’Or.

Although his best-known compositions remain the A minor Piano Concerto and the incidental music composed for Ibsen’s fantastical play Peer Gynt, Grieg’s main achievement remains the shorter pieces he wrote both for piano solo and for orchestra, together with a large quantity of lyrical songs that show a remarkable balance between singer and piano accompaniment and some of which have found a firm hold in the Lieder singer’s repertoire.