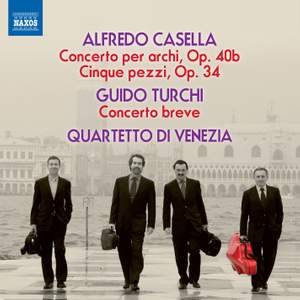 Towards the end of the 19th century a new home-grown school of instrumental music began to flourish in Italy, bearing fruit over the following decades. Casella’s Cinque pezzi (1920) and Concerto, Op. 40b (1923), both for string quartet, are two high points of of the genre, with the Concerto quickly becoming an international success. Guido Turchi’s Concerto breve, which draws on the models of Hindemith and Bartók, is another significant contribution to the development of the string quartet in 20th-century Italy.