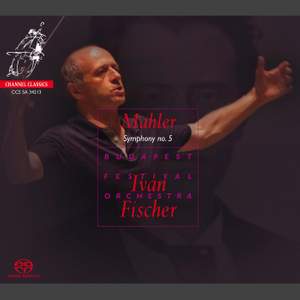 The woodwind play with plenty of character and there's a surprisingly phrased trombone solo early on...Fischer knows that his strings are lean and incisive rather than sumptuous-sensuous in Berlin... — BBC Music Magazine, February 2014, 3 out of 5 stars More…

After the highly acclaimed recordings of Mahler Symphonies no. 1, 2, 4 and 6 Iván Fischer and his Budapest Festival Orchestra now recorded the Fifth Sympony with its famous Adagietto in F major for strings and harp - one of the most intimate pieces that Mahler ever wrote for the orchestra.

According to Fischer the Fifth is “the most Jewish of all Mahler's symphonies. The first movement takes us to the unmistakable mood of Jewish lamentation, the finale to the childlike vision of messianic joy.”

Iván Fischer is founder and Music Director of the Budapest Festival Orchestra. This partnership has become one of the greatest success stories in the past 25 years of classical music. Intense international touring and a series of acclaimed recordings for Philips Classics, later for Channel Classics have contributed to Iván Fischer’s reputation as one of the world’s most visionary and successful orchestra leaders.

The woodwind play with plenty of character and there's a surprisingly phrased trombone solo early on...Fischer knows that his strings are lean and incisive rather than sumptuous-sensuous in Berlin or Vienna fashion, so he drives a strong line with direct emotion and no sentimentality...Sound is pleasingly natural.

Fischer takes an expansive view...pretty much throughout...Fischer says he thinks this is the most Jewish of Mahler's symphonies and his way with voicing, with the way it is sung, is precisely that...collectors of the Fischer cycle will want his distinctive view of every piece. This could be the most controversial of the lot.

the great partnership of Iván Fischer and his Budapest players make music of supreme intimacy and vitality. They endow the work with a poise and lyricism too often sacrificed in favour of frenzied intensity...you're spoilt for choice in this much recorded work. This might yet prove a favourite.

Fischer declares the Fifth the “most Jewish” of the set: something we certainly sense in the rise and fall of Fischer’s phrasings and the rhythms’ idiomatic snap...the heartbreaking adagietto [is] performed with the fragile poise of musicians stepping over something very precious.