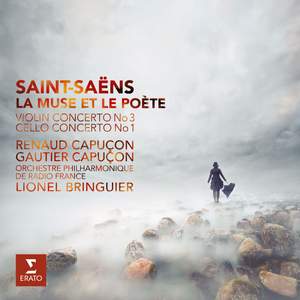 In the Violin Concerto, Renaud Capucon and the conductor provide a lesson in how to generate rubato organically from the material...the soloist's tone and technique deserve the highest praise...The... — BBC Music Magazine, Christmas Issue 2013, 4 out of 5 stars More…

James explores the music of French composer Camille Saint-Saëns and chooses some of his favourite recordings.

Violinist Renaud Capuçon and his cellist brother Gautier are joined by the young French conductor Lionel Bringuier and the Orchestre Philharmonique de Radio France for a programme of works by Camille Saint-Saëns. It includes the lyrical, intimate and rarely heard ‘Duet for Violin, Cello and Orchestra’, La Muse et le Poète.

For this recording of three concertante works by Saint-Saëns they are joined by another leading French musician of the younger generation, the conductor Lionel Bringuier, and the Orchestre Philharmonique de Radio France. Though only 27, Bringuier will become Chief Conductor and Music Director of Zurich’s much-respected Tonhalle Orchestra in 2014. He recently completed six seasons as Resident Conductor of the Los Angeles Philharmonic, where he worked with music directors Esa-Pekka Salonen and Gustavo Dudamel. It was as a 14-year-old student that he first got to know Renaud Capuçon and this Saint-Saëns disc first began to take shape three or so years ago.

Recorded in Paris at the Salle Pleyel and the Théâtre du Châtelet, it comprises Saint-Saëns’ Violin Concerto No 3, Cello Concerto No 1 and ‘Duet for Violin, Cello and Orchestra’, La Muse et le Poète – a work that the Capuçon brothers had never played before and which is only rarely heard.

In the Violin Concerto, Renaud Capucon and the conductor provide a lesson in how to generate rubato organically from the material...the soloist's tone and technique deserve the highest praise...The recording is clear and spacious.

Renaud and Gautier Capucon's beautifully modulated playing...is complemented by the discreet colouring, finesse, warmth and dramatic cohesion that Lionel Bringuier draws from the [orchestra]...the freshness, passion and poignancy of the playing are compellingly revivifying.

They are all evidently fine musicians and cannot be faulted in matters of taste and technique...This is a fine disc neatly combining a rarity with first class performances of two deservedly acclaimed concertos.

A disc of Saint-Saëns's best-known concertos, with soloist Renaud Capuçon on commanding form in the Violin Concerto No. 3, and his younger brother Gautier doing the honours in the Cello Concerto No. 1. The two siblings come together for a hauntingly expressive performance of La Muse et le Poète, all of which are ably supported by the Orchestre Philharmonique de Radio France, conducted by Lionel Bringuier.

The music [of La Muse] is fluent and pleasant without being memorable...The Capuçons certainly do their best to make the music worthwhile...Renaud gives a performance of the third violin concerto that is full of ripely expressive effects; Gautier's version of the cello work plunges in with almost breathless intensity

These two concertos might be among his more familiar works, but these sensitively imagined performances make for essential listening.