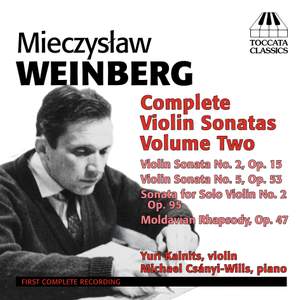 The works on this disc are played with both skill and an obvious love and understanding of the material by the two musicians. — MusicWeb International, 30th January 2014

Since his death in 1996, the music of Mieczysław Weinberg is being discovered by musicians and listeners all around the world. He had a remarkable life story. Born in Warsaw in 1919, his early musical experiences were as pianist and ensemble leader at a Jewish theatre where his father was composer and violinist. In 1939 he fled before the Nazis, ending up in Moscow where he lived for the rest of his life.

His vast output includes 26 symphonies, seven operas, seventeen string quartets and much other chamber music, and some 200 songs.

His style has much in common with Shostakovich: fluent contrapuntal skill, an acute sense of drama and a keen feeling for melody, often inflected with Jewish cantilena.

Moscow-born violinist Yuri Kalnits studied at the Gnessin Institute and moved to London to study at the Royal College of Music. There he met Csányi-Wills, who also composes and works as a recording producer, for Toccata Classics among other labels.

A sample review of Vol. 1 in this series: ‘the Toccata artists (violinist Yuri Kalnits and pianist Michael Csányi-Wills) play with searing intensity… dizzying, breathtaking brilliance, completely at the service of this profound excursion into the cross-section of sound and the human soul. You must hear this’.

The works on this disc are played with both skill and an obvious love and understanding of the material by the two musicians.