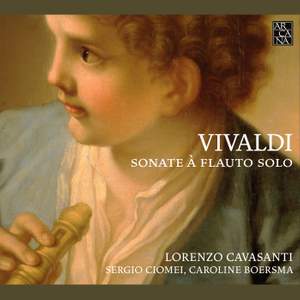 I. Preludio a Capriccio

I. Preludio (Andante) [Trasposto in Re Minore]

Vivaldi wrote for the recorder practically throughout his composing life, from the youthful little sonata RV 52 to the much more complex concerto RV 441 written in old age. While the five recorder concertos are among his most popular works, with a long list of recordings (among which that of Dorothee Oberlinger and the Sonatori de la Gioiosa Marca - Arcana A334 - stands out), Vivaldi’s output of sonatas has curiously attracted very little attention and has never been the subject of a specific investigation.

Lorenzo Cavasanti fills this major gap by offering us the first complete recording of the sonatas for recorder and basso continuo, including Vivaldi’s recently discovered Sonata RV 806. This recording also provides an opportunity to sample the various recorders used in Vivaldi’s Venice, with each of the seven sonatas using a different instrument, from the soprano recorder to the bass. The result is a reference recording for followers of Vivaldi and recorder players alike, enhanced with liner notes by the authoritative Federico Maria Sardelli, author of Vivaldi’s Music for Flute and Recorder (Aldershot, Ashgate, 2007, translated by Michael Talbot) and editor of the Vivaldi Catalogue (RV). Lorenzo Cavasanti has earned an international reputation as a concerto soloist performing with many leading ensembles and orchestras including Le Concert des Nations (Jordi Savall), Accademia Bizantina (Ottavio Dantone), I Sonatori della Gioiosa Marca, L’Europa Galante (Fabio Biondi). With the latter he recorded the Concerto in G minor Op. 10 No. 2 RV439, “La notte” (Virgin Classics).