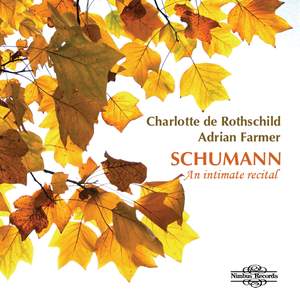 Of the thirty-one songs that make up this recital all but four are concerned with the intimate emotional experiences of a woman or young girl. All the events, expectations, disappointments, joy and sorrow, are communicated directly by the person experiencing them. The four observational songs (Der Nußbaum, die Lotusblume, Herzeleid and Schneeglöckchen) in which the poet acts as our intermediary, also share a preoccupation with private, youthful yearning and heartbreak, with only Schneeglöckchen falling into the archetypal lieder catch-all of gender neutral ‘nature’ song.

Charlotte De Rothschild's career has taken her all over the world. With her wide knowledge of the song repertoire, from different eras, countries and genres, she has created some wonderful themed programmes; the best known being the programme which traces the musical history of her forebears with music by, and anecdotes about, the composers who were friends, teachers or ancestors of the Rothschild family during the 19th and 20th Centuries. This year, Charlotte has presented this programme in Switzerland, Japan, Singapore and the U.K

Adrian Farmer trained as an accompanist at the Royal Northern College of Music in Manchester. He first encountered Nimbus Records in 1979, when he was invited to record for them, but quickly made the decision to join the founders as a record producer. Adrian has made several recordings for Nimbus with other artists including Nimbus’s founder the bass Shura Gehrman, tenor Dennis O’Neill, pianists Nina Walker in Schubert and Martin Jones at one and two pianos and in the 1980s he recorded Ravel’s ‘Mother Goose’ with legendary pianist Vlado Perlemuter, which he describes as a treasured memory.