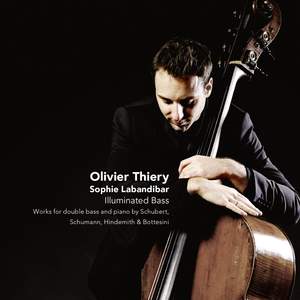 On this CD the outstanding young French double bass player Olivier Thierry performs music by Schubert, Hindemith, Schumann and Bottesini. The Schubert piece is an arrangement of the celebrated Arpeggione Sonata, whilst the Schumann Romances included on the disc were originally written for oboe or violin. He is accompanied by pianist Sophie Labandibar.

Olivier Thiery is a French double bassist from the modern school, trying to bring awareness of his instrument to a new level by proving that a double bassist isn’t the equivalent of an unmusical craftsman. In 2004 French Olivier Thierry entered the class of Professor Niek de Groot at the Folkwang Hochschule Essen, Germany, and since August 2008 he has been playing with the Royal Concertgebouw Orchestra in Amsterdam. In 2011 Olivier Thiery received the "Prix de Salon", an award established by De Salon, the orchestra's business network to further the musical careers of young musicians with the Royal Concertgebouw Orchestra.

The French musician Sophie Labandibar is a renowned concert pianist and accompanist.

She has been engaged as a soloist, chamber musician and accompanist throughout Europe, and has appeared at numerous international events including the Pablo Casals Festival in Prades, the piano festival “La Roque d’Anthéron”, and the Festival Radio France Montpelier.