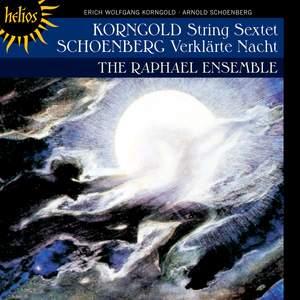 The Raphael Ensemble are superb in every respect; their performances have blazing commitment and integrity, and Hyperion's recording is in the demonstration category — BBC Music Magazine More…

James selects some great recordings of music by the father of twelve-tone composition.

These two works, so eminently suited as concert partners, disappeared after Hitler came to power. Korngold and Schoenberg were both victimized for being ‘non-Aryan’ and their works were banned. Verklärte Nacht quickly reestablished itself, but the Korngold had to wait for its reappraisal until it was discovered in 1987 by The Raphael Ensemble, who gave its first public performance in the United Kingdom at The Purcell Room in London that year.

In this recording, two of the finest examples of the string sextet repertoire have been re-united. Stripped of all the surrounding intrigue, they can be enjoyed for what they truly represent—the very summit of late Austrian romanticism from Imperial Vienna, just before it finally disappeared for ever.

The Raphael Ensemble are superb in every respect; their performances have blazing commitment and integrity, and Hyperion's recording is in the demonstration category

If you find the string orchestra version of this piece that I recommended above a bit excessive, then perhaps you might wish to try the original version for string sextet, performed here by the Raphael Ensemble. Of course it's a leaner sound than a full string orchestra, but that's not to say there's any lack of tone in this intensely dramatic reading.