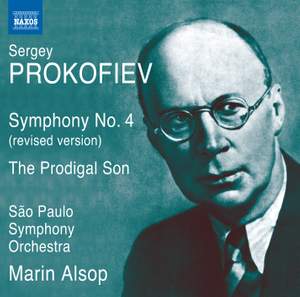 for once, Prokofiev's Sovietised Fourth does not sound a bombastic and coarsened version of the original; rather, one hears striking and even disturbing echoes of several of his Soviet works...Polished... — BBC Music Magazine, December 2013, More…

Prokofiev’s imposing Fourth Symphony and his final ballet for Sergey Diagilev, The Prodigal Son, share common roots but are entirely distinctive in character. The vivid depictions in the ballet’s moral tale include sensual temptations, drunken debauchery, robbery and remorse. The 1947 revision of the Fourth Symphony, lengthened and enriched in orchestration by the addition of a piccolo clarinet, piano and harp, makes extended use of themes from The Prodigal Son as well as unused material. Prokofiev’s Fifth Symphony with Marin Alsop and the São Paulo Symphony Orchestra (8573029) was described as “an outstanding achievement” by BBC Music Magazine.

for once, Prokofiev's Sovietised Fourth does not sound a bombastic and coarsened version of the original; rather, one hears striking and even disturbing echoes of several of his Soviet works...Polished playing and ensemble.

if you usually find the composer too raw, Alsop's integrated, lyrical view of these works could be just the ticket.

[Alsop] brings out the lyricism prevalent in the score [of the Symphony], but also rises to the drama of the work’s climaxes. The very ending of the symphony is quite powerful and Alsop does not disappoint here...the São Paulo Symphony plays its heart out for Alsop.

Alsop illuminates instrumental timbres that Prokofiev often mingles in unconventional alliances...His brand of lyricism, too, is shaped smoothly and with supple, subtle inflections. Together with the energy the São Paulo orchestra has at its disposal, all these traits contribute to interpretations that radiate a genuine Prokofiev spirit.

The Independent on Sunday 6th October 2013

Alsop’s players spin a convincing yarn, with long lines pushing far beyond the safety of the family home, and they bring the whole to an exhilarating reconciliation.