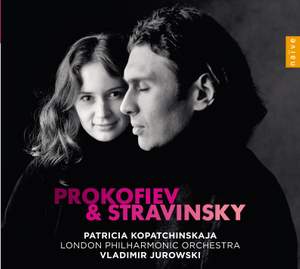 Kopatchinskaja brings [virtuosity] to the [Stravinsky] in spades, but she also shatters the image of the work as a neo-classical homage to Bach...Her whole approach to Stravinsky...brings his... — BBC Music Magazine, January 2014, 5 out of 5 stars More…

Gramophone and BBC Award-winner Patricia Kopatchinskaja records exclusively for Naïve. Releases to date have included Beethoven’s Violin Concerto with Philippe Herreweghe, a CD entitled 'Rapsodia' which explores the roots of George Enescu’s music with examples of Moldovan and Romanian folk music. Her most recent release was an all-Hungarian disc featuring concertos by Bartók, Ligeti and Eötvös which has won the concerto category in the Gramophone Awards 2013.

The two violin concertos coupled on this recording display as many affinities as they do divergences. Both stem from creators in conflict with their native Russia – one choosing to return there, the other settling permanently in exile; both belong to the aesthetic of the ‘return to order’ observed from 1920 onwards and characterised by the reappropriation of models from the past. If Prokofiev preserves the traditional bases of the concerto, he combines them with a search for a new lyricism. As for Stravinsky, he reworks tried and trusted models while offering a deliberately neutral, distanced expressivity.

Kopatchinskaja brings [virtuosity] to the [Stravinsky] in spades, but she also shatters the image of the work as a neo-classical homage to Bach...Her whole approach to Stravinsky...brings his world close to Prokofiev's...where Kopatchinskaja seems to be feeling her way into the music...A wonderful disc.

One feels that with every phrase she has succeeded in making the [Prokofiev] concerto her own...Throughout both concertos, conductor and orchestra appear to support with enthusiasm Kopatchinskaja's vision of the music, with many distinguished solo contributions...Not to be missed.

From the start, it is clear that there is a lot more to her than glittering technical accomplishment. That quality is present in spadefuls, but is simply used to back up a truly outstanding imagination...There is a sense of discovery, of spontaneous re-creation of these two masterpieces. Totally stylish yet wholly new; great playing and a truly outstanding issue.

The pungency of her playing is what thrills the most, from the opening chord’s slap in the face...Jurowski and the LPO bring similar bite to the orchestral component, with each instrumental line clear and glinting. The performance is irresistible, from first to last...This is a violinist with something more important to offer than dazzling technique. It’s called character.