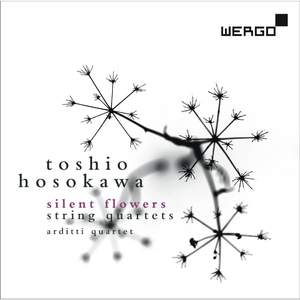 The Japanese composer’s music explores modernist complexities as much as it draws on Takemitsu’s legacy with its exquisite sound world — Sunday Times, 1st September 2013

Hosokawa has on occasion mentioned that the specific sounds in his string quartets are not only derived from the fertile ground of Asian spirituality, but also from the scores of western modern and avant-garde composers, declaring that it is not his intention to perpetuate divisions between Europe and Asia: “I would not like to emphasize the leaves and branches of the different kinds of music that have developed within the two spheres of eastern and western culture, but rather find the common aspects that exist in the roots out of which both have grown.” The Arditti Quartet enjoys a world-wide reputation for their spirited and technically refined interpretations of contemporary and earlier 20th century music. Many hundreds of string quartets and other chamber works have been written for the ensemble since its foundation by first violinist Irvine Arditti in 1974.

As the Ardittis approach 40 their busy schedule has included a rare Royal Albert Hall appearance as part of the Henry Wood Promenade concerts on 15th July, playing Lachenmann's Tanzsuite for quartet and orchestra with the Bamberg Symphony under Jonathan Nott. August saw a welcome return to the Edinburgh festival. Irvine Arditti will have his 60th birthday concert on 16th October in the Wigmore hall in London.

This year, the quartet will play two concerts at the Huddersfield Contemporary Music festival: on 15th November, they will open the festival in a concert with the Freiburg experimental studio; on 21st November the quartet will perform an all-Zorn concert, which will contain, both of his quartets, Necronomicon and The Alchemist , as well as the new quintet with soprano, Pandora's Box with Sarah Maria Sun. In 2014 there will be a concert in the Milton Court hall of the Barbican to celebrate the 40 years of the Arditti quartet.