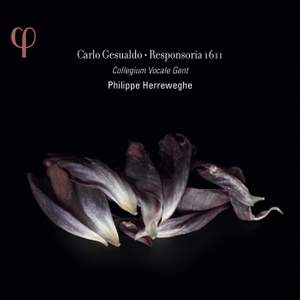 the choir makes a careful distinction between those pieces that depict events, and those that meditate upon them...Herreweghe also coaxes some very expressive moments from the choir (the dark... — BBC Music Magazine, January 2014, 4 out of 5 stars More…

I. In monte Oliveti

The second project of Collegium Vocale Gent and Philippe Herreweghe for Phi to focus on Renaissance music is devoted to one of the most remarkable of all composers: Carlo Gesualdo. Both his life, characterised by extravagant and excessive behaviour, and his compositions left their mark on the history of music. Although best known for his secular music, he also wrote an almost equivalent number of sacred works that demonstrate his fervent faith. The Tenebrae Responsories comprise a set of pieces for Holy Week, in all twenty-seven motets for six voices, a psalm, and a hymn, published under his own supervision in 1611. As in his madrigals, the music is underpinned by many unexpected chromatic variations that create expressive images evoking tears, the earthquake, the despair of Christ on the cross, etc. The acoustics of the church of the village of Asciano in Tuscany, where the programme was recorded in 2011, create the perfect soundscape for this music.

the choir makes a careful distinction between those pieces that depict events, and those that meditate upon them...Herreweghe also coaxes some very expressive moments from the choir (the dark glitter of the low voices in Aestimatus sum is magical).

To the music's overt drama Philippe Herreweghe responds with a typically more measured controlled performance, so one may say that the performance is cooler than the music...the set is one of their most impressive achievements.

Herreweghe's and the Collegium Vocale Ghent's can easily be considered the most precise, alive and rounded view of the Responsories...The Collegium's achievement is all the more remarkable because of their marriage - without sentimentality - of concision, concentration and sentiment.