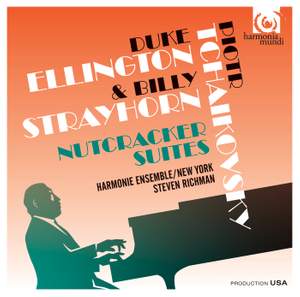 Duke Ellington and Billy Strayhorn’s jazz adaptation is now something of a classic. Here is a fresh new recording which, enterprisingly, couples it with a performance of Tchaikovsky’s original... — BBC Music Magazine, Christmas 2013 More…

Dance of the Mirlitons (Reed Flutes)

Dance of the Sugar Plum Fairy

Reviving the art of 'swinging the classics', Steven Richman and the Harmonie Ensemble/New York present two different versions of the beloved 'Nutcracker' Suite, side-by-side on the same album for the first time: the Tchaikovsky original of 1892, followed by the 1960 jazz remake masterminded by the American dream team of Duke Ellington and Billy Strayhorn. Compare and contrast! [Hands up all those brought up on Bee Bumble and the Stingers?]

"The idea for The Two Nutcrackers came about when trombonist Art Baron, who had played with the Duke, brought over a pile of LPs by Ellington, among them a 1960 recording of the Tchaikovsky Nutcracker Suite in Ellington and Billy Strayhorn’s superb jazz arrangement.

I immediately fell in love with this recreation, and decided I just had to perform it. Then it occurred to me that it would be a great combination to put the original Tchaikovsky Nutcracker Suite together on the same recording with the Duke’s jazz version...This seemed a perfect follow-up to my recent symphonic jazz CDs, which include Gershwin by Grofé: Original Orchestrations & Arrangements...Then I realized an amazing coincidence. I had devoted over a decade to the music of Dvorák, and to raising funds for erecting a statue of the composer in Stuyvesant Square Park in New York, across the street from where he lived at 327 East 17th Street (and composed the famous “New World” Symphony). While in New York from 1892-95, Dvorák taught the future teachers of Gershwin, Copland, and Ellington, three of America’s greatest composers. When I realized that my recent projects had been devoted to those same great musicians, it seemed a slam-dunk to continue with this concept! The Duke himself said “There are simply two kinds of music, good music and the other kind.” I completely agree, so let the music and performances speak for themselves, for all to enjoy." Steven Richman

Duke Ellington and Billy Strayhorn’s jazz adaptation is now something of a classic. Here is a fresh new recording which, enterprisingly, couples it with a performance of Tchaikovsky’s original score.

All fantastic, and the results never detract from the magnificence of Tchaikovsky’s original...Fantastic fun, and nice sleeve art too.