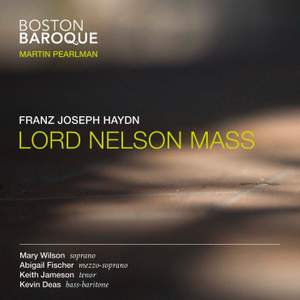 this new account opens with impact, even if the florid upper strings occasionally have to struggle against the implacable tirades of chorus, trumpets and drums. And the quartet of soloists led... — BBC Music Magazine, December 2013, 4 out of 5 stars More…

Haydn: Symphony No. 102 in B-Flat Major in B Flat Major

Released to coincide with Boston Baroque’s 40th Anniversary Season, ‘Haydn: Lord Nelson Mass’ is the anticipated follow up to ‘Haydn: The Creation’ which launched the orchestra’s partnership with Linn in 2012.

The ensemble’s concerts of the Lord Nelson Mass have received rave reviews, with the Boston Globe praising the ensemble’s ‘magnificent performance.’

Boston Baroque’s performance follows the leaner, original orchestration of Haydn's manuscript including the original vocal lines (made simpler in a later edition).

Creation soloists Keith Jameson tenor and Kevin Deas bass-baritone return for this recording, having won acclaim for their previous performances. They are joined by Mary Wilson soprano and Abigail Fischer mezzo-soprano.

The Mass is partnered on this recording by Symphony No. 102, the most powerful, brilliant and interesting of Haydn's London symphonies, giving centre stage to the ensemble’s talented musicians.

The three-time Grammy-nominated ensemble is widely regarded as ‘one of the world’s premier period-instruments bands’ (Fanfare).

Boston Baroque's recordings - of which Fanfare magazine wrote ‘each one is an incomparable gem’ - are heard by millions on classical radio stations in North America and Europe.

Boston Baroque's many career milestones include the American premiere of Rameau's Zoroastre; a Mozart opera series including Marriage of Figaro, Così fan tutte, and the American period-instrument premieres of Mozart's Don Giovanni and The Magic Flute; and a revelatory exploration of the Beethoven symphonies on period instruments.

this new account opens with impact, even if the florid upper strings occasionally have to struggle against the implacable tirades of chorus, trumpets and drums. And the quartet of soloists led by agile soprano Mary Williams proves a well integrated team.

This pairing makes eminent sense...The orchestra, in both the Mass and the symphony, play with a justified delight in this life-affirming music.

a unique setting, freshly captured here by the skilled American period-instrument forces of Boston Baroque under Martin Pearlman. The acoustic is resonant, the playing in the symphony is deft and lively.

[Boston Baroque] performs the stormy opening movement with rhythmic verve and intensity...A fine quartet of soloists...jostle for the spotlight with the orchestra, which shines in the rambunctious Symphony No. 102.