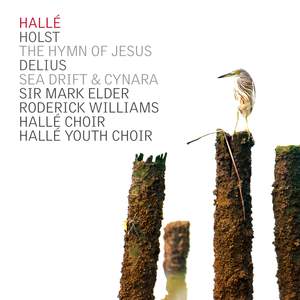 The Halle plays with precise attacks and perfect blending, and Mark Elder directs with sure control of the episodic structure...Williams is an outstanding soloists, with well focused tone throughout... — BBC Music Magazine, December 2013, 5 out of 5 stars More…

Following unparalleled success with recordings for orchestra and choir, including awards in recent years from both Gramophone and BBC Music Magazine, Hallé and Sir Mark Elder present a compelling programme of evocative and rarely performed works which will be a valuable addition to the catalogue.

Holst’s large-scale work The Hymn of Jesus explores the connection between dancing and religious ritual in a highly concentrated and intense work. It combines musical techniques and thematic material to produce a work which is a highly evocative representation of the serenity and exaltation of mysticism.

Delius' enigmatic choral poem Sea Drift is described by Elder as a ‘masterpiece’ and is a work he has long wanted to perform and record. Composed in 1903 to verses by Walt Whitman the work depicts, in wonderful music of great emotional intensity, an expression of grief, loss and bereavement. Including some of the most ravishing music that Delius ever penned, Sea Drift stands as one of the most profound evocations of loss in British music.

Cynara also follows the theme of loss in a setting of texts by the poet Ernest Dowson, lamenting the loss of the mistress of the poet Horace in classical literature. With its yearning violin solo, overpowering sense of hedonistic melancholy, brief dance-episode and highly effective ending, it is a fortunately preserved reminder of Delius at the height of his expressive powers.

The performances of these works perfectly illustrate the renaissance that has been achieved at the Hallé under Sir Mark Elder including from the two Hallé choirs.

Featuring acclaimed British baritone Roderick Williams; a soloist at the height of his powers, here in repertoire which is perfectly suited to his lyrical, dramatic and musical expertise.

The Halle plays with precise attacks and perfect blending, and Mark Elder directs with sure control of the episodic structure...Williams is an outstanding soloists, with well focused tone throughout his range and the clearest of diction...telling the story with restrained compassion.

this keenly poetic, at times daringly spacious and shrewdly observant account finds Mark Elder and his combined Hallé forces operating at the very top of their game...[Williams's] involvement is total; indeed, his heart-rending delivery of the transcendental closing section...never fails to bring a lump to the throat...this imposing Hallé newcomer demands to be heard

The heights of excellence that the Hallé forces are consistently achieving under Elder are quite remarkable. Placing a strong emphasis on expression and such judicious pacing the performers seem to relish every note. This is an indispensable addition to any serious collection of music for chorus and orchestra.

The disc is primarily a showcase for the Hallé Choir and Youth Choir. They're majestic, elated and thrillingly in-your-face in the Hymn of Jesus; Sea Drift finds them more muted and subtle, rightly so. Mark Elder's Holst is exciting and insightful.