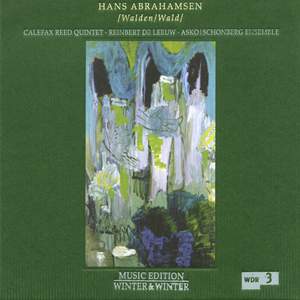 Clear traces of the new simplicity aesthetic, there is more sense of mystery, in places even threat, and the whole experience is more emotionally and evocatively engaging...Performances and recording... — Gramophone Magazine, November 2013 More…

Hans Abrahamsen: 'Wald' is sort of a variation series about the beginning of my woodwind quintet 'Walden'. The thematic idea is very simple: an ascending fourth-call and the answers of other voices. This is repeated several times, but since the call has a slower pulse than the answers, the order is finally being changed. The title of 'Walden' was borrowed from the title of the American philosopher Henry David Thoreau. He wrote about life in the wood, where the American philosopher spent two years. It was an experiment, the attempt to abandon all artificial, society-grown needs and to rediscover the oneness of the human being with nature. Although Thoreau did not undertake a detailed analysis of society, he was, in his comprehension of economy and ecology – the cyclic constitution of nature – way ahead of the times. 'Walden' was composed in a style of recycling and of 'new simplicity'. Unnecessary material was peeled in order to make space for other characteristics such as conciseness and clarity.

One meets several principles in this quintet: organics (growth, bloom, decay), concreteness (mechanic patterns) and finally the descriptive (horn sounds from afar and other ghostly music of the past enter like a dream our consciousness).

The music of 'Wald' and 'Walden' is embedded in field recordings by Stefan Winter. The breathing of the timeless and peaceful woods is the neutral state of sound and there is a sound esoteric beyond silence.

Born in Copenhagen in 1952, Hans Abrahamsen studied at the Royal Danish Academy of Music. His music is inspired by his mentors Per Nørgård and Pelle Gudmundsen-Holmgreen, who were two of his composition teachers, and in the 1980s he became close both personally and stylistically (partly through another period of study) to György Ligeti.

Abrahamsen is considered to have been part of a trend called the "New Simplicity", which arose in the mid-1960s as a reaction against the complexity and perceived aridity of the Central European avant-garde.Notable works include a piano concerto written for his wife Anne-Marie Abildskov, and the extended chamber work 'Schnee', where the paring-down of material appears to reach a new extreme.

In March 2013 Hans Abrahamsen had a two-day mini-residency at the Royal Academy of Music and in 2011 was shortlisted for the RPS Music Award for Large-Scale Composition for this work 'Wald'.

Clear traces of the new simplicity aesthetic, there is more sense of mystery, in places even threat, and the whole experience is more emotionally and evocatively engaging...Performances and recording are certainly first-rate.

Walden deftly amalgamates motivic, rhythmic and evocative elements during the course of four movements. Thus an opening Moderato of gradually intensifying animation is followed by the most understated of marches, the Andante of elegant pose segues into a brief and gently humorous Allegretto.

[Wald is] an extraordinarily potent piece, whose elusive character is perfectly captured by Reinbert de Leeuw and Asko Schönberg.