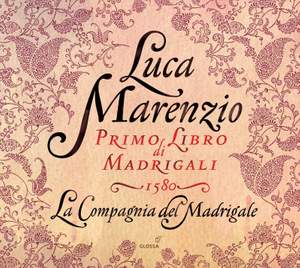 La Compagnia del Madrigale has done him proud with sublime, gorgeously toned and exquisitely expressive interpretations, moreover, the clarity and depth of the recording itself draws the listener... — Choir & Organ, November/December 2013 More…

Further evidence of rich and pictorial artistry in the interpretation of Italian madrigals comes from La Compagnia del Madrigale as they now bring all their experience to bear on the early five-part works of Luca Marenzio. The ensemble’s new Glossa recording is set to reflect la dolce vita in Rome in the 1580s and 1590s, and both music and text in Marenzio’s 'Primo Libro di Madrigali a cinque voci' powerfully evoke this age of gold in the arts and sciences, with sumptuous patronage from cardinals and princes.

Marenzio’s 'Primo Libro' (a huge success when published) adds another jewel to Glossa’s madrigalian crown: as well as the Gesualdo Book Six from the same group, there is much Monteverdi, of course, and the Marenzio Books 6 and 9 and Gesualdo Books 4 and 5, all recorded by La Venexiana (which shares many of the same singers as La Compagnia). In addition to the madrigals from the 'Primo Libro' the new recording contains the rarely-performed 'Sestina Mentre ti fui sì grato', co-written by six members of the Renaissance collective known as the ‘Musici di Roma’ (Nanino, Moscaglia, de Macque, Soriano, Zoilo and Marenzio himself).

Once again, the recording benefits from an entertaining essay courtesy of Marco Bizzarini, which vividly sets the scene for the musical life of Luca Marenzio in the Eternal City.

La Compagnia del Madrigale has done him proud with sublime, gorgeously toned and exquisitely expressive interpretations, moreover, the clarity and depth of the recording itself draws the listener right into the beating and sometimes bleeding, heart of each miniature treasure.

Time and again as I listened, my jaw dropped at both the quality of Marenzio's cleverly varied five-voice music and the astonishing sonorities of La Compagnia del Madrigale's beguiling performances.

La Campagnia del Madrigale, recently formed, are superb. They are passionate, beautifully balanced with perfect intonation and clear diction. Their clear understanding of the text is coupled with evident knowledge of where it is going...This is a fascinating and engrossing disc. The extensive booklet notes by Marco Bizzarini are engaging and detailed.