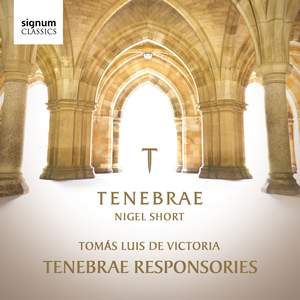 this recording is the most nuanced and telling available. First there is the sheer sound of the ensemble: beautifully balanced and tuned with, at times (Caligaverunt oculi), an almost glassy... — BBC Music Magazine, December 2013, 5 out of 5 stars More…

Tenebrae return to the sublime music of Tomás Luis de Victoria on Signum with this recording of his timeless Tenebrae Responsories. The works mix the words of the Gospels with other texts commenting on collective suffering written around the 4th century, and would traditionally have been performed as part of a moving service in which candles are slowly extinguished to mark the progress and suffering of Christ that forms the Passion story.

this recording is the most nuanced and telling available. First there is the sheer sound of the ensemble: beautifully balanced and tuned with, at times (Caligaverunt oculi), an almost glassy perfection. Next there is an exceptional awareness of the different narrative voices...Finally there is the seamless, architectural line...This really is excellent.

This disc, like their recent recording of his Requiem, bridges the spiritual gulf between church and concert hall, and their appreciation of the text and its meaning is especially profound. The blend is gorgeous and awareness of individual lines and voices always serves both the music and its meaning.

Under Short’s direction, Tenebrae create a sound combining the meticulous, the meditational and the madrigalian.

a recording that strips all excess musical flesh aside, exposing the chilly bones of these penitential masterpieces...The heart of the cycle...is almost impossibly charged, its balance of vocal fragility and tensile strength discovering the emotional paradox at the core of this music.

This beautifully realised release from Tenebrae goes a long way to confirming their position as the one of - if not the - finest chamber choirs at work in Britain today...The singing itself is marvellous throughout. When the sopranos sing alone the effect is bright, pearly and luminescent...The tightness of the ensemble is a thing to marvel at

It's music of extraordinary restraint yet powerful dramatic charge...Tenebrae's performance conveys much of that sense of drama in the smallest inflections...It's a beautifully judged and scaled performance.

Nigel Short avoids monotony through tempo changes and dynamic contrast: some sections are splendidly vigorous; others – the end of ‘Seniores populi’, for instance – are magically rapt. ‘Tenebrae factae sunt’ is appropriately transposed down by an octave and sung by the tenors and basses. The eponymous choir, 13 strong, is exemplary.