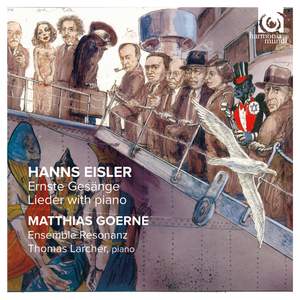 Goerne’s performance of the Ernste Gesange is mesmerising… Goerne colours every word with insight and intensity and moulds each melodic line with amazing fluidity. The Ensemble Resonanz follows... — BBC Music Magazine, Christmas 2013 More…

From 1920s Vienna and the Berlin of the Weimar Republic to emigration to the USA, then back to Vienna after the defeat of Nazism, to end his days in East Berlin: Hanns Eisler’s life was one long exile against the backcloth of the artistic, technical and political revolutions of the 20th century. Distance, irony and melancholy are the aesthetic corollaries that characterise the lieder presented here, their atmosphere often evoking the despair of those dark times. The early piano sonata gained the young Eisler an admiration that has never dimmed. Hanns Eisler was born in Leipzig on 6 July 1898 and went to school in Vienna. After two years as a common soldier in the First World War, he became a student of Arnold Schoenberg in 1919, dedicating his Sonata for Piano Op. 1 to his teacher in 1923. He moved to Berlin 1925, where he composed for workers' choruses and agitprop groups and collaborated with Brecht (Die Maßnahme, Die Mutter) from 1928. Eisler initially moved to Paris then London, before taking exile in America from 1938, where he created his most significant chamber music works. Alongside music for eight Hollywood pictures, Eisler also composed his 'Hollywood Songbook' to texts by Brecht, Hölderlin and others while in California.

In 1948, Eisler returned to Europe, initially to Vienna and Prague and ultimately to East Berlin. Although he wrote the National Anthem of the GDR to a text by Johannes R. Becher, conflict arose with GDR cultural bureaucracy when he published his libretto 'Johann Faustus' in late 1952. In 1959, he witnessed the premiere of his 'Deutsche Symphonie', mostly composed while in exile, at the State Opera Unter den Linden. He died on 6 September 1962 in East Berlin.

Goerne’s performance of the Ernste Gesange is mesmerising… Goerne colours every word with insight and intensity and moulds each melodic line with amazing fluidity. The Ensemble Resonanz follows his every nuance with fantastic precision and brings a breathtaking variety of texture to a spare orchestral accompaniment.

Goerne's heartfelt contribution is plainly central to this project...The baritone enjoys a close artistic collaboration with composer-pianist Thomas Larcher and the sonic quality is first-rate...Eisler's 'classical' side is strikingly well served.

the real interest of the new disc is Goerne's performance, beautifully shaded and articulated, of Eisler's very last work, the Ernste Gesänge...The sonata is played with careful attention to detail by Thomas Larcher...a fascinating and hugely rewarding disc.

Goerne and Eisler prove you can also be thrillingly expressive wielding a delicate whisper, a pungent shout, and irony’s stiletto heel.

Importantly, he never lets us forget what a lyrical composer Eisler could be; the Epilogue is appropriately devastating, its final flourish dissolving suddenly into a plucked bass note...Accessible, stimulating, intelligent music, and an ideal introduction to a great composer.