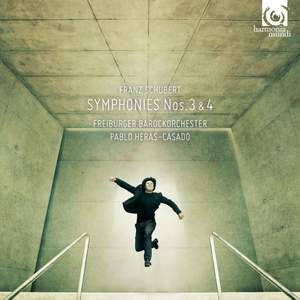 [Heras-Casado] certainly seems to have boundless energy...some of the music's melodic detail...gets lost at Heras-Casado's breathless speed, but there's no doubting the drama and excitement of... — BBC Music Magazine, November 2013, 4 out of 5 stars More…

In his first recording for harmonia mundi Pablo Heras-Casado gives us two of Schubert's six symphonies performed with Freiburger Barockorchester. The carefree Third of 1815 ends with a Rossinian tarantella whilst the darker Fourth (1816) looks more towards Beethoven. The subtitle 'Tragic' came from the 19-year-old composer himself but perhaps the real tragedy is that this symphony, like all his others, was never played in public in his lifetime.

In 2013/14 Heras-Casado debuts with the New York Philharmonic, Philadelphia Orchestra, London Symphony Orchestra, Philharmonia Orchestra and Gewandhaus Orchester Leipzig – as well as at the Metropolitan Opera, where he conducts Verdi's 'Rigoletto'. He will also tour with Freiburger Barockorchester and guest-conduct a series of concert and opera performances at the Mariinsky Theatre.

[Heras-Casado] certainly seems to have boundless energy...some of the music's melodic detail...gets lost at Heras-Casado's breathless speed, but there's no doubting the drama and excitement of his playing.

The Freiburgers are encouraged to throw everything they have at the score and the result is performances which, if you have always passed over these pieces in favours of the sweetness of Schubert’s 5th and perhaps the greater glories of the 8th and 9th, might just make you think again.

With lithe, brilliantly articulated strings, crystal-clear woodwind detail and an inexhaustible rhythmic verve, it's a thrilling performance[ of the Third]...Heras-Casado's sensitivity is never in doubt, and he rounds off the [Fourth] symphony with just about the most viscerally exciting performance of the finale I've ever heard.

thrillingly fizzing performances of two Schubert symphonies …The requisite light touch is unfailingly present in both symphonies...Dynamics and articulation are closely attended to...Well worth a listen for its constant energy and infectious optimism.

[Heras-Casado] relishes the pristine, transparent and characterful sound of the Freiburgers’ period instruments, which suits this music so much better than large modern symphony orchestras.

these spirited period-instruments performances of Schubert’s Third and Fourth Symphonies make one wonder anew why they are heard so rarely. The rising Spanish conductor Pablo Heras-Casado and the Freiburg Baroque Orchestra strike an ideal balance between sinuous energy and surging Romantic spirit.