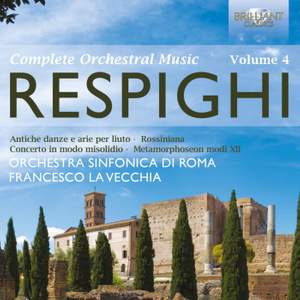 La Vecchia directs proceedings with obvious affection, and the playing has engaging spirit and no mean grace, though I do miss the abundant charisma, corporate sheen and ingratiating glow of,... — Gramophone Magazine, February 2014 More…

Brilliant Classics’ survey of Respighi’s complete orchestral music continues here, with a release that explores the Italian composer’s modernising of the past (as previously evidenced in works such as Gli uccelli, see volume 1) as well as two of his most mature creations, written in the last eleven years of his life. Starting with the Antiche danze e arie per liuto, three suites in which Respighi balances antiquated forms against modern instrumentation such as the celesta, we move on to Rossiniana, a charming suite derived from Rossini’s piano piece Les riens and with a particularly affecting second movement (Lamento). Next follows the Concerto in modo misolidio of 1925, a work for piano and orchestra whose main theme is based on Gregorian chant and with a vigorous Passacaglia of a finale; completing the compilation is the affective Metamorphoseon modi XII, also pervaded by freely plainsong‐like themes.

As ever, Respighi’s imaginative use of timbre and first‐class orchestration permeate these engaging works, which are skilfully interpreted by an all‐Italian cast. About the first volume in the series, allmusic.com wrote: ‘The Orchestra Sinfonica di Roma under Francesco La Vecchia certainly plays very well, with the brass fully on top of the numerous passages in which they are mercilessly exposed.’

This 4th instalment of the Complete Orchestral Works of Ottorino Respighi contains some of his most popular works: the Ancient Airs and Dances, and the Rossiniana.

Respighi wrote his Ancient Aires and Dances on the basis of Renaissance and Baroque dances, either of folk music origin (author unknown), or lute pieces by Italian composers, Molinari, Galilei, Caroso, Roncalli. The rich, brilliant and colourful orchestration by Respighi adds a new dimension, enhancing the joyful or melancholy character of these relatively uncomplicated pieces.

The Concerto Misolidio is a serious large scale Piano Concerto, full of drama and pathos, based on Gregorian Chant (the perfect music for a Dan Brown novel!).

The Respighi series by the Orchestra Sinfonica di Roma, conducted by maestro Francesco la Vecchia received uniform critical acclaim, 4 and 5 star reviews and praise for the power and transparency of the performances.

La Vecchia directs proceedings with obvious affection, and the playing has engaging spirit and no mean grace, though I do miss the abundant charisma, corporate sheen and ingratiating glow of, say, Seiji Ozawa's classic...[Metamorphoseon] remains a likeable, agreeably characterful display

The Orchestra Sinfonica di Roma gives a sparkling performance of all three suites and the playing is enthusiastic, graceful and nicely detailed with good contributions from the woodwind soloists. There are a few moments of shaky ensemble but these are few and far between.