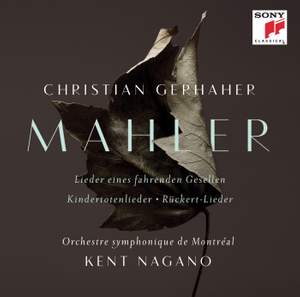 James rifles through the huge amount of outstanding Mahler performances on disc, and offers his selection of the very best.

‘Mahler’ is Christian Gerhaher’s second orchestral album, with Orchestra Symphonique de Montréal conducted by Kent Nagano. Gerhaher has never recorded the Mahler songs in their authentic orchestral versions before, although these works have been cornerstones of his repertoire for many years. Gerhaher will be Artist in Residence with the Berlin Philharmonic next season (2013/14) and perform Mahler songs with them at multiple concerts. Besides his principal activity giving concerts and recitals, Christian Gerhaher is also a highly sought-after performer on the opera stage. Under Riccardo Muti he sang Papageno in a production of The Magic Flute at the Salzburg Festival. Gerhaher gave guest performances in the title role in Henze’s Prinz von Homburg at the Theater an der Wien, as Wolfram at the Teatro Real in Madrid, at the Vienna State Opera and Munich State Opera, and in 2010 at the Royal Opera House Covent Garden in London, where in 2011 he received the famous Laurence Olivier Award for his interpretation. Future engagements are scheduled in roles such as Pelléas, again in Frankfurt – where he has already sung Orfeo, Wolfram and Eisenstein – Posa in Don Carlo in Toulouse and again performances as Wolfram in Berlin, Vienna and London. Having received countless awards for his singing of lieder, in 2010 Christian Gerhaher was voted “Singer of the Year” by the journal Opernwelt for his portrayals of the Prinz von Homburg and of Wolfram in Vienna and Munich. Christian Gerhaher has performed together with conductors such as Nikolaus Harnoncourt, Simon Rattle, Herbert Blomstedt, Heinz Holliger, Kent Nagano, Ingo Metzmacher, Mariss Jansons, Bernard Haitink and Christian Thielemann in the world’s major concert halls.

As ever, Gerhaher combines vocal beauty and acute sensitivity to verbal and musical nuance with a certain patrician restraint...The Montreal orchestra (superlative wind solos) match the baritone in their sentient, compassionate playing, while Nagano keeps textures lucid...one of the finest baritone versions of these cycles since Fischer-Dieskau.

Gerhaher treats us to some tender singing at the end of Kindertotenlieder, and Ich bin der Welt abhanden gekommen from the Rückert-Lieder is very affecting.

Admirers of Gerhaher's lieder singing won't need any encouragement to listen to this disc. They'll marvel once again at the astonishing range of colour and inflection he applies to every phrase...[there are] are myriad instances when the essence of a song seems perfectly captured

the intensity comes from his attention to the text and the ebb and flow of consonance and dissonance...The obsessive love, raw misery and the yearning for oblivion are all vividly realised, "Ich bin der Welt…" simply devastating.

As a singer of German art songs, the Munich-based Christian Gerhaher has no rivals today...The Montreal players rise to the occasion under Kent Nagano, but it is Mr. Gerhaher’s uncanny ability to inhabit each word and each phrase fully that makes this a riveting — and unsettling — experience.