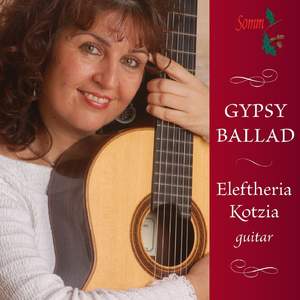 Here are a few words from the celebrated Greek guitarist Eleftheria Kotzia, which encapsulate the significance of this enchanting new release from SOMM.

“It was the folkloric element, expressed by the special, intimate sound of the guitar which attracted me to the repertoire chosen for this recording. In a way, I feel as though I’ve come full circle since recording The Blue Guitar (incl. the first recording of Tippett’s Guitar Sonata), Mediterraneo (works by composers inspired by Greek music, which also reflect my Greek roots), La Guitarra Latina (South American music) and Fuoco (Mediterranean music). These in turn inspired me to research and record music which pulled all these diverse strands together in repertoire containing folkloric, ethnic elements from both the old and the new world. The disc consists of a wide-ranging repertoire of little known works which I hope will be both stimulating and entertaining. They express the voice of the contemporary classical guitar and it’s music that I love.”

"The disc includes Suite Castellana, the first work ever written for guitar by a non guitarist, the Spaniard Moreno Torroba, as well as songs and dances from the ‘old world’ (Armenia, Macedonia, the Balkans, Persia[Iran]). Joaquin Rodrigo was influenced by Romani music and the gypsy song Sostar Mange, was beautifully crafted by the Czech composer Sylvia Bodorová in her Gypsy Ballad. From the ‘new world’ the famous tangos Cumparsita and El Choclo from Argentina and Uruguay are the only arrangements, alongside original salon music from Brazil, the infectious rhythms of the Afro-influenced music of the Caribbean and the purity of Venezuelan song.”