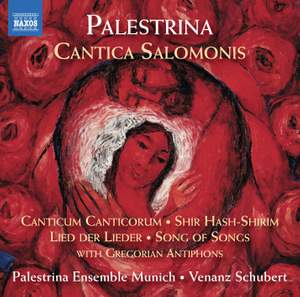 Palestrina’s Fourth Book of Motets was dedicated to his patron Pope Gregory XIII and published in Rome in 1584. He took as his text The Song of Songs (also known as The Song of Solomon) and the 29 motets, written in an age of religious tumult and Counter-Reformation, evoke the love of Christ in devotional music of chamber-like refinement and joy. This recording also includes plainchant antiphons related to the texts, and ends with a motet of 1583, Afferentur Regi.

Palestrina, the ‘saviour of polyphony’, remains one of the most recorded composers of his age. These deeply evocative, devotional motets were written in 1583 in an age of religious disorder and tumult. Naxos’s disc has distinguishing features in that it adds plainchant antiphons related to the texts and ends with a motet of 1583, Afferentur Regi.