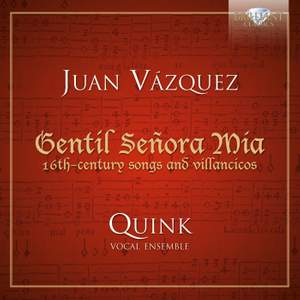 Every voice is perfectly suited to this music, and they blend wonderfully. The lines are beautifully shaped and thanks to the great transparency of sound every one of them can be heard. Add to... — MusicWeb International, 20th February 2014 More…

Sacred music occupied an important role in 16th-century Spain, but there is much evidence that secular vocal polyphony held a place in society too. Such music is to be found in the little-known Juan Vázquez’s Recopilación which dates from around 1560; as well as canciones and sonetomadrigals, the collection includes various villancicos – the main focus of this recording – then a popular style of song and which Vázquez clearly overhauled through replacing endless repetition with melodic and rhythmic variety. That Vázquez’s contribution to the genre was both popular and significant (he wrote over 90 in total, most of which were set to texts by leading Spanish poets of the day) is demonstrated by the many later arrangements of his villancicos for vocal soloists with vihuela accompaniment.

Performing these highly engaging, deftly written works are the Dutch vocal group Quink, founded in 1978 and ranking among the world’s best a cappella ensembles. The recording, which can only serve to increase our appreciation for this largely-forgotten composer, underlines the group’s astonishing variety of tonal colour – of their Benjamin Britten CD, the New York Times drew attention to Quink’s ‘elegant phrasing, impeccable intonation and a purity of tone reminiscent of Renaissance madrigals.’

Every voice is perfectly suited to this music, and they blend wonderfully. The lines are beautifully shaped and thanks to the great transparency of sound every one of them can be heard. Add to that a perfect intonation and delivery and one can conclude that this disc is a little gem. I can't think of a better case for Vázquez' oeuvre.