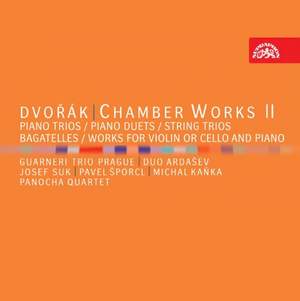 Dvořák: Capriccio for violin & piano, B81

Dvořák: From the Bohemian Forest for piano duet, Op. 68

The sixth instalment of the “coloured series” mapping Dvořák’s oeuvre in pivotal Supraphon recordings links up to two previous parts featuring chamber music (SU38152, SU39212) and one containing piano works (SU40182). Within the series, this box set rounds off the complete Dvořák instrumental creation. It comprises virtually unknown early pieces (Serenade), paramount works of the mature creator (Dumky, Rondo, Silent Woods), as well as masterful miniatures – compositions technically undemanding yet engrossing by virtue of their rich invention and charm (Bagatelles, Romantic Pieces, Sonatina). Dvořák also reflected the period fashion of piano four-hands playing; some of the essential cycles known today in orchestral versions were originally written for piano duo (both of the series of Slavonic Dances, Legends). The renowned ensembles and instrumentalists who made these recordings (Josef Suk, the Guarneri Trio, the Panocha Quartet, Pavel Šporcl, Jiří Bárta, etc.) can be deemed the true bearers of the distinct Dvořák tradition.