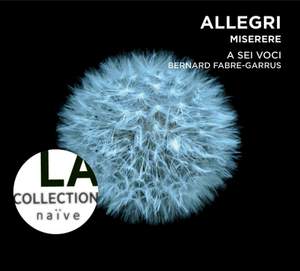 Bernard Fabre-Garrus, his A Sei Voci ensemble and the musicologist Jean Lionnet, with their characteristic fervour and concern for authenticity, pored over the writings of Allegri’s contemporaries and rediscovered the lost paradise of the original sources. In 1993, they restored the original intent of the piece in this unique interpretation, true to the tradition of improvised ornamentation, with its inventive, blossoming lines.

The surprises do not stop there, because, A Sei Voci inserts between this 'authentic' version and the traditional, familiar version conveyed over the centuries and other forgotten works by Allegri, composed for liturgical services in the Pontifical Chapel in Rome. With its expressive sobriety, supported by the understated playing of organist Dominique Ferran and perfectly balanced voices that alternately come to the fore from within the counterpoint, A Sei Voci invites you on to the stairway to paradise...Bernard Fabre-Garrus died in 2006 and A Sei Voce disbanded some five years later.