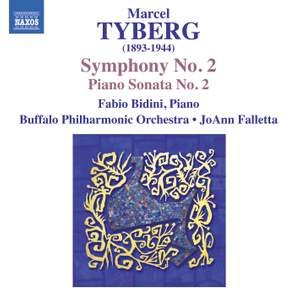 Marcel Tyberg was a victim of the World War II Holocaust, but his scores were preserved and have recently been revived through the efforts of JoAnn Falletta. The Second Symphony is filled with romantic enchantment and pastoral narrative, reflecting Tyberg’s reverence for 19th century styles. The Second Piano Sonata also develops earlier traditions, revealing the influence of Beethoven. Tyberg’s Third Symphony can be found on Naxos 8572236, the Washington Post stating that the Buffalo Philharmonic “has never sounded better… Tyberg’s music is well-crafted and earnest, tuneful and filled with seriousness of purpose and harmonic mastery.”

JoAnn Falletta and the Buffalo Philharmonic’s release of Marcel Tyberg’s Symphony No. 3 and Piano Trio created quite a stir in 2011, and anyone who encountered this CD will have had their eyes open for further recordings of Tyberg’s remarkable work. ClassicsToday.com commented that “JoAnn Falletta and her Buffalo forces do [the Third Symphony] proud: this is a bold, confident performance, excellently paced…” This recording of the Second Symphony develops on these musicians’ experience and enthusiasm in further revelations from a forgotten composer. The Piano Sonata No. 2 is also in the eminently safe hands of internationally renowned pianist Fabio Bidini.

The performance could hardly be bettered: JoAnn Falletta and the Buffalo Philharmonic are completely at home in this music and they are very well recorded...Overall [the Sonata] is an impressive work. Fabio Bidini plays it impressively and is recorded truthfully.