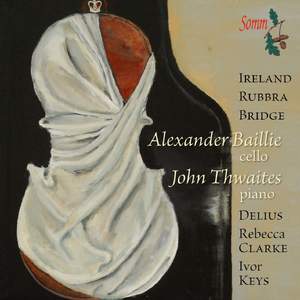 These are passionate, focused, full-blooded readings without a hint of reticence or apology. Alexander Baillie and John Thwaites invest each work with the power of utter belief, and as a result... — BBC Music Magazine, October 2013, 5 out of 5 stars More…

In recent years SOMM has established a strong reputation for its promotion of British Music counting, among unique recordings in its catalogue, several prestigious World Premieres for Piano and Orchestra which had been hidden in music library vaults unpublished and undiscovered until SOMM made them available on disc and promoted them worldwide through its distribution network. Included among these are the Vaughan Williams Fantasia, the Bax Concertino, the Frederick Austin Concertino, the William Mathias Piano Concerto No. 1, the Piano Quintet of Ian Venables and the Piano Music of Reginald King.

This ambitious and impressive double disc of Cello Sonatas by Delius, Bridge and Ireland (CD1) and Rebecca Clarke, Ivor Keys and Rubbra (CD2) is no exception. It boasts the well loved Sonatas by Bridge, Delius, Ireland and Rubbra as well as two world premieres, the Cello Sonatas by Rebecca Clarke (1919) and Ivor Keys (1960). Clarke was Stanford’s first female pupil at RCM and became a professional violist, having taken lessons with Lionel Tertis. Listening to her Viola (or Cello) Sonata, described as “sensuous, Bacchanalian and intoxicating and languid” by turns, reminds us that she felt closest to the music of both Debussy and Ravel. Keys was organ scholar at Christ Church, Oxford, and an accomplished all-round musician who made his career as an academic at the Universities of Belfast (where he held the first Hamilton Harty Chair from 1947), Nottingham (from 1954) and Birmignham (from 1968).

The artists on this CD set are Cellist Alexander Baillie, internationally recognised as one of the finest cellists of his generation, and his Duo Partner, Pianist John Thwaites, Head of Keyboard Studies at Birmingham Conservatoire, a busy Soloist as well as Chamber Musician and a frequent broadcaster for the BBC and others. It’s interesting that Edmund Rubbra’s Cello Sonata (1946) is dedicated to William Pleeth, his cello partner in the Edmund Rubbra/Erich Gruenberg/William Pleeth Piano Trio. Alexander Baillie’s teachers were Fournier, Rostropovich, du Pré and most poignantly, William Pleeth!

The disc takes pride of place among other recordings in the SOMM catalogue, of the music of Delius and Ireland during the Five-day Delius Ireland Festival: A Celebration.

These are passionate, focused, full-blooded readings without a hint of reticence or apology. Alexander Baillie and John Thwaites invest each work with the power of utter belief, and as a result these are probably the best current versions of the Bridge, Ireland, Rubbra and Delius Sonatas.

[the Clarke] is a magnificent work, powerful and passionate...Ivor Key's Sonata is a rarity...It makes a splendid discovery.

Alexander Baillie and John Thwaites are in impeccable accord with each other and with each composition - completely sensitive to every mood and style...Six significant British cello sonatas impeccably performed.