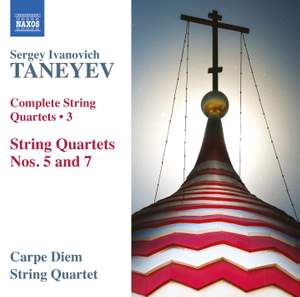 whilst never sounding truly impassioned, and certainly not Russian, the Carpe Diems display a good deal of poise and commitment to Taneyev's deserving cause. — MusicWeb International, 26th September 2013

Sergey Taneyev was a pivotal figure in Russian musical life. A student and later close friend of Tchaikovsky, he was the teacher of Rachmaninov and Scriabin. Taneyev’s chamber music is some of the most distinguished music of its time, expertly crafted and revealing a masterly control of form. His quartets are especially notable. No. 7 in E flat major is an early work whose classicism recalls Mozart and Beethoven but whose expressive power is concentrated in its lovely slow movement. No. 5 in A major, Op. 13 is a melodically appealing work, at times energetic and dramatic, at others playful and exuberant.

whilst never sounding truly impassioned, and certainly not Russian, the Carpe Diems display a good deal of poise and commitment to Taneyev's deserving cause.