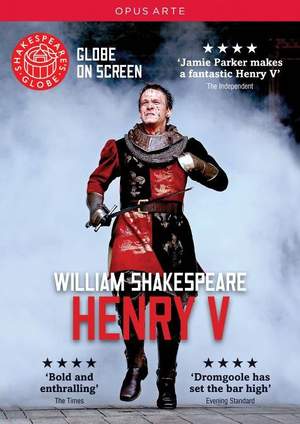 Capped by one of the most famous speeches ever written, King Henry V recalls the momentous English victory at Agincourt. With comic sub-plots to be found among Henry’s soldiers, the production boasts some terrific performances – including Sam Cox as the ‘splendidly unhinged’ Pistol (Telegraph). In the title role is Jamie Parker, who ‘casts such a rapt spell that you feel the entire audience would rise up to march behind him.’ (Independent)

Broadcast into cinemas worldwide in May 2013.

Henry V was the play that opened the current Globe theatre.

Shakespeare’s masterpiece of the turbulence of war and the arts of peace.

Features Jamie Parker as Henry V, already acclaimed for his role as Hal in Henry IV Parts I & II at the Globe in 2010.