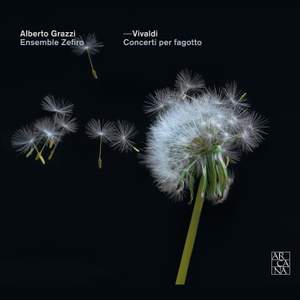 there is much to be said for Zefiro's cherry-picking...Grazzi's dazzling virtuosity in the most fiendish rapid and wide-leaping passages and lyrical tenderness in slow movements catches the elusive... — Gramophone Magazine, November 2013 More…

Vivaldi: Concerto for Bassoon, Strings and Basso Continuo in A Minor, RV 500

According to Greek mythology, Zefiro was the tender and kind God of the Western Wind. In 1989, the oboists Alfredo Bernardini and Paolo Grazzi, and the bassoonist Alberto Grazzi, members of the most outstanding baroque orchestras, founded Zefiro, a versatile music group specialising in the eighteenth-century repertoire that gives particular prominence to wind instruments. Since then, Zefiro has performed at many major worldwide festivals and recorded 20 Cds, including the complete works for wind ensemble of W. A. Mozart, all virtuosic sonatas of J.D. Zelenka (Astrée), and three instalments of the distinguished Vivaldi Edition on Naïve.

After a long-term collaboration with Sony Classical/Deutsche Harmonia Mundi, this new Vivaldi recording marks the beginning of an exclusive partnership of the Italian ensemble with Arcana, which will result in a true Zefiro series, characterised by its own artwork, focused on new releases but whose task will also be to make their discography still available.

Antonio Vivaldi was (and has remained) the most productive composer of concertos for solo bassoon. Thirty-nine concertos for solo bassoon, strings and basso continuo by him have survived. As a group, they are noteworthy for their high musical quality, their stylistic maturity and their depth of feeling, a property shared with Vivaldi’s concertos for the cello. Vivaldi shows perfect understanding of the mercurial temperament of the instrument, which is able in an instant to move from the comic to the tragic, from the melancholy to the joyful.

An active player on the early music scene for the last 25 years, Alberto Grazzi is presenting here seven concertos from the enormous corpus of the Venetian composer. This selection, with 4 concertos in major and 3 in minor keys, represents Alberto Grazzi's personal choice in showing the expressive qualities of the bassoon in Vivaldi's world. This work is the result of a Alberto Grazzi's long-term practise as a baroque player, here magnificently supported by the Ensemble Zefiro.

there is much to be said for Zefiro's cherry-picking...Grazzi's dazzling virtuosity in the most fiendish rapid and wide-leaping passages and lyrical tenderness in slow movements catches the elusive paradox of refinement and humour