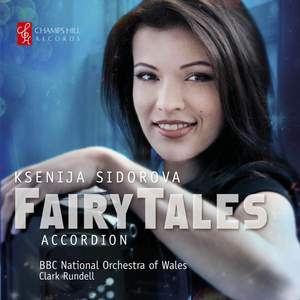 I. Let us Dance Into the Fairy-Tales

IV. The Enchanted Princess – The Brave Princess and The Evil Dragon

VI. The Sailor and the Enchanted Accordion

Vassiliev: Who's the puppet?

Accordion sensation Ksenija Sidorova in a showcase demonstrating the full range and emotional power of her instrument. 'As an accordionist you sort of have to carve your own path, so I consider it my mission in this way to introduce the instrument to a wider audience', she says.

Fairy Tales concerto by Vaclav Trojan, recorded with BBC National Orchestra of Wales, is written in an enchanting and approachable style with beautiful, heartfelt melodies.

Arrangements and transcriptions of virtuosic showpieces include Moszowski’s Caprice Espagnol, the scherzo from Mendelssohn’s A Midsummer Night’s Dream (a transcription that has its roots in Rachmaninov’s arrangement) and Grieg’s Holberg Suite.

Contemporary composition Who’s the Puppet? was written for Ksenija by Russian composer Artem Vassiliev. Petr Londonov’s Scherzo-­Toccata is a popular piece with accordionists but little-­known to wider concert audiences.

All are performed on Ksenija’s Pigini accordion which she considers to be the Rolls Royce of instruments.

You can sense Sidorova’s delight at finally being able to interact with a full orchestra. Trojan’s cheery, colourful score is more soundtrack than concerto, but contains some glorious things, such as a Prokofiev-like waltz in its sixth movement and a hyperactive close. We even get a smoochy Piazzolla tango as a bonus track. Highly recommended.