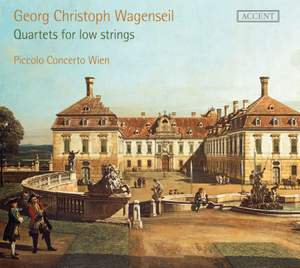 With nothing higher than violas on the top lines, and a double bass permanently in the frame, Wagenseil's urbane quartets inhabit a richly burnished soundworld, ravishingly realised here. — BBC Music Magazine, December 2013, 4 out of 5 stars More…

Wagenseil: Sonata No. 2 in F Major

Wagenseil: Sonata No. 4 in A Major

Wagenseil: Sonata No. 6 in G Major

Wagenseil: Sonata No. 5 in B Major

Wagenseil: Sonata No. 1 in D Major

The importance of Georg Christoph Wagenseil (1715-1777) in the development of the classical symphony cannot be underestimated, and his concertos were also significant in the development of early Viennese classicism. As its chief representative, Wagenseil unites Italian, French and German stylistic elements in his works, as was typical of the early 18th century.

The Six Quartets for Low Strings occupy a special position in the chamber music of Wagenseil, simply by virtue of their unusual scoring and the type of classical four-movement quartet that was just coming into being. The two upper parts can be performed by either two cellos or two violas, as desired; the lower parts are played by a cello and a double bass.

Both variants, equally attractive in sound, can be heard on the present double CD.

The Piccolo Concerto Vienna under the direction of the double bassist Roberto Sensi introduces music to us that is notable, not least for a typically Viennese quality: charm.

With nothing higher than violas on the top lines, and a double bass permanently in the frame, Wagenseil's urbane quartets inhabit a richly burnished soundworld, ravishingly realised here.

I loved listening to these tuneful delights… voices blending together rather than stark contrasts between very high and very low… these six work played so beautifully by this exceptionally fine ensemble, prove that he truly was a gifted composer and one who certainly merits more attention.