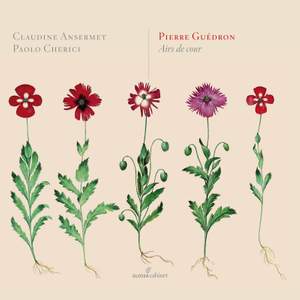 Interpolated with preludes by Ballard, Vallet and contemporaries, Guedron's lute songs are delivered cleanly and prettily, though Ansermet's spoken verse is more expressive than her singing. — BBC Music Magazine, December 2013, 4 out of 5 stars More…

Glossa is now introducing into its catalogue one of the most sought-after titles from the now defunct Symphonia label and a recording replete with poetry and expertise. The graceful airs de cour of Pierre Guédron – who worked in the courts of the French kings Henri IV and Louis XIII at the beginning of the 17th century – are interspersed here with lute preludes by leading exponents of the instrument at the time, such as Robert Ballard and Nicolas Vallet. Soprano Claudine Ansermet and lutenist Paolo Cherici conjure up a recital of singular beauty which takes us back to the world of those early aristocratic salons, such as that of the Marquise de Rambouillet, one which was known throughout Europe as a centre of the highest order for literature, poetry and music.

Interpolated with preludes by Ballard, Vallet and contemporaries, Guedron's lute songs are delivered cleanly and prettily, though Ansermet's spoken verse is more expressive than her singing.

I highly commend this disc. The music is of great beauty: every single air is a gem...The present disc was originally released in the late 1990s...Ansermet sings them brilliantly...her voice is clear and flexible in all ranges...This reissue offers the opportunity to make up for lost time. Grab it.