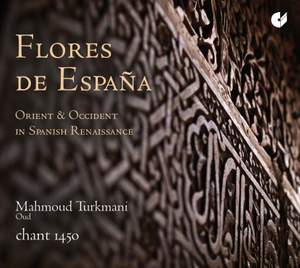 Spanish music around 1500 reflected a variety of different facets. The academic compositional techniques for music performed in church and at court had been acquired from the European musical centres of this period (northern Italy, France and Burgundy). In contrast, waves of immigrant cultures had also brought their own traditional musical styles to Spain: Jews, Moors and Gitanos (Gypsies), resulting in the evolution of two co-existing musical worlds with almost no common elements, clearly distinguished from one another in their function, written form and social cohesion. 'Flores de España' brings these two worlds together: chant 1450 performs sacred a capella works interspersed by Mahmoud Turkmani’s improvisations on the oud, a lute used in traditional Arabic music. The recording is a meeting between east and west, improvisation and composition and instrumental and vocal music. The juxtaposition distinctly underlines the audible differences between orient and occident, but simultaneously reveals that the melodic idioms are not really so far apart and can even be combined to form a coherent musical language. The genuine crossover works provide the highlight of this cultural rendezvous: the oud accompanies Gregorian melodies, uniting the two worlds and thereby generating a new music.

It consists of rather nice choral music by Anchieta, Encina, Ribera, Escobar and Milans authentically sung by the five male voices of Chant 1450

Here is a pleasingly provocative collision of two aesthetics, both juxtaposed and, in four plainchant pieces, superimposed...The four chants in which Turkmani improvises possess an alluring potency all of their own.