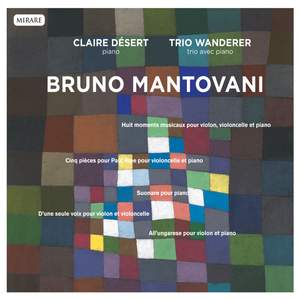 Internationally recognised French composer Bruno Mantovani [b.1974] is regularly inspired by musical works of the past to create new objects. This disc presents five pieces for piano and strings, inspired by Franz Schubert, Béla Bartók, Maurice Ravel but especially painter, Paul Klee. These pages are teeming with contemporary interpretations of old masters.

After producing two CDs released by Sony Classical, the Wanderer Trio began a new partnership with harmonia mundi in 1999. Since then, nine recordings have been released. With a particular fondness for contemporary music, the Wanderer Trio has premiered several works by Thierry Escaich (Lettres Mêlées, 2004), Bruno Mantovani (Huits Moments Musicaux, 2008), Frank Michael Beyer (Lichtspuren, 2008) and Marco Francescini (Triple Concerto 'Ego', 2011). This interest has resulted in this Mirare programme for July, to be followed by Arenski and Tchaïkovsky trios for hm in autumn 2013. Their recordings have been awarded several prizes including Critic's Choice, Gramophone and CD of the Month from BBC Music Magazine.

Outstanding among the five works presented here is the compelling performance by the gifted pianist Clare Désert of the longest and earliest in this programme Suonare from 2006… the empathy, sensitivity and imagination she brings to bear on this challenging 17-minute score

an impressive collection of chamber music by the 38-year-old Bruno Mantovani...played with superb commitment ...The centrepiece is a work for solo piano, Suonare, whose flamboyant virtuoso writing suggests that of all Mantovani's 20th-century French predecessors, it may be Ravel who left the biggest mark on his style