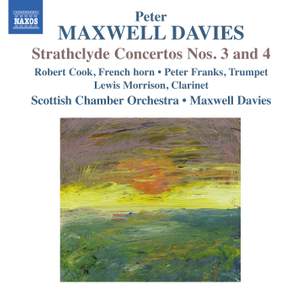 Sir Peter Maxwell Davies’ Strathclyde Concertos are among his most significant contributions to the concerto genre. Concerto No. 3 for Horn and Trumpet marks a turning point in the cycle of ten concertos by employing multiple soloists, and stands in the lineage of works by Haydn, Mozart and Bach’s Brandenburg Concertos. Concerto No. 4 explores the clarinet’s lyrical Mozartian heritage, alongside subtle percussive effects and agile virtuosity.

Previously released by Collins, these recordings of Strathclyde Concertos were performed by the Scottish Chamber Orchestra and these soloists, whom Maxwell Davies wrote these works specifically for. They are approachable and exciting works, and the cycle of ten represents his greatest contribution to the concerto genre. He deliberately evokes older, classical models but his music remains very much of our time.

[The Clarinet Concerto] is imbued with a subtly Scottish flavour...a central Adagio provides a still core to the work, played here with quiet intensity by Lewis Morrison...The Double Concerto for Horn and Trumpet seemed somewhat arid by comparison, though one had to admire the virtuosity of the two soloists