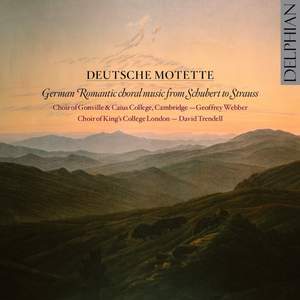 This performance of Strauss's Deutsche Motette has the right quality of rapture...Credit to the conductor David Trendell for eliciting from his combined college choirs, whose youthful freshness... — BBC Music Magazine, October 2013, 4 out of 5 stars More…

Delphian’s 'superchoir' reunites after its highly successful recording of Shchedrin’s 'The Sealed Angel', this time for a programme of German Romantic music.

Strauss’s sumptuous 'Deutsche Motette' is the last word in late Romantic choral opulence, its teeming polyphony brought to thrilling life by this virtuoso cast of over 60 singers. ['Rosenkavalier' meets 'Friede auf Erden' via 'The bells'] The rest of the programme explores the vivid colours and shadowy half-lights of a distinctly German music that reached its culmination in Strauss’s extravagant masterpiece. The singing throughout combines a musical intensity and imagination with an understanding of period style, that are hallmarks of both choirs’ work.

The Choir of Gonville and Caius College, Cambridge (directed by Geoffrey Webber) and The Choir of King’s College London (directed by David Trendell) are two of the UK’s leading collegiate and university choirs. Both choirs combine singing at services during term time with a busy schedule of concerts, recordings and broadcasts, both in the UK and abroad.

This performance of Strauss's Deutsche Motette has the right quality of rapture...Credit to the conductor David Trendell for eliciting from his combined college choirs, whose youthful freshness to the interpretation which suits the imprecatory nature of Rückert's poem perfectly.

the frank, forward tone of this ensemble softens the academic rigidity of the Brahms and makes a surprise highlight of Peter Cornelius's Liebe

Strauss’s Deutsche Motette, Op 62...is one of those multi- part, a cappella prodigies like Tallis’s Spem in alium. With its roving romantic harmony it’s even more sumptuous than that famed precursor, and comes across magnificently, clean-lined yet surging.