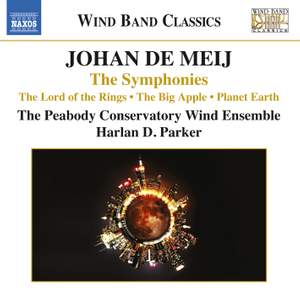 Meij: Symphony No. 1 'The Lord of the Rings'

I. Gandalf (The Wizard)

IV. Journey in the Dark: a. The Mines of Moria - b. The Bridge of Khazad-Dum

Award-winning conductor and composer Johan de Meij’s First Symphony ‘The Lord of the Rings’ is a spectacular evocation in five portraits and scenes based on Tolkien’s tale of a grand quest and the struggle of good against evil. The Second Symphony is an ode to the symmetry of New York’s streets and its massive architecture, as well as a tribute to the American styles of Copland and Bernstein, while the cinematic effects of the Third Symphony form an epic paean to the entire earth in all its miraculous beauty.