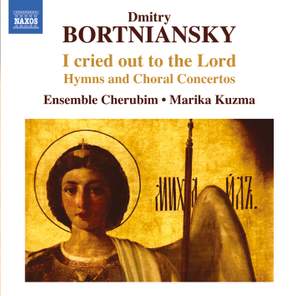 Offer, Bortniansky: I cried out to the Lord

Bortnyansky: Kol' slaven nash (How glorious is our Lord in Zion)

Kol' slaven nash (How great is our Lord in Zion)

Ukrainian-born Dmitry Bortniansky studied composition in Italy and later became the first native Kapellmeister to the Russian Czars. His choir was renowned throughout Europe. As a composer for the Orthodox Church, which forbids the use of musical instruments, Bortniansky developed a symphonic approach to choral writing that influenced all later Slavic composers and gives his Choral Concertos their absolute distinctiveness. The Cherubic Hymn No. 7 is among the best-known of all Slavic choral works. Concerto No. 32 was beloved of many of his Slavic successors, including Tchaikovsky. This recording of the concertos is the first to restore authentic early nineteenth-century Church Slavonic pronunciation and reintroduce fine details found in archival sources.

This disc includes two of the most popular of all Bortniansky’s Choral Concertos, Nos. 6 and 32. The composer’s training in Italy equipped him to write these strong works, which remain admired examples of this unusual genre.