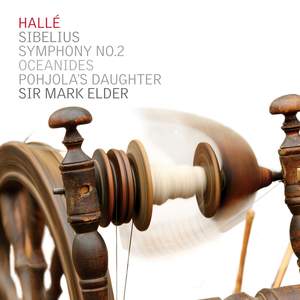 under Elder, [Pohjola's Daughter is] a primal folktale rather than an urbane fantasy...[in the Symphony] Elder's elemental strength, relieved by a sense of light and space and the Halle's intense... — BBC Music Magazine, July 2013, 5 out of 5 stars More…

Following their recording of Symphonies No 1 and 3, this release marks the second disc of Sibelius works from the award-winning Hallé under Sir Mark Elder.

The disc includes the long awaited recording of Elder’s interpretation of the ever-popular Symphony No. 2, a work closely associated with the Hallé who gave the British premiere in 1905.

It is coupled with the dramatic Pohjola’s Daughter, an orchestral show-piece with the Hallé here at the height of its powers, and the less well known and deeply evocative musical portrait of the sea, The Oceanides.

Together, the performances of these works perfectly illustrate the renaissance that has been achieved at the Hallé under Sir Mark Elder.

The 2nd Symphony was recorded live from sell out concerts in the Bridgewater Hall, of which critics said:

under Elder, [Pohjola's Daughter is] a primal folktale rather than an urbane fantasy...[in the Symphony] Elder's elemental strength, relieved by a sense of light and space and the Halle's intense playing, help to make this highly recommendable.

Elder is at his best in the first movment [of the Symphony] which, like the two tone-poems, is sensitively pointed and rhythmically supple, but the Andante seems to me to be holding something back...The precision of Elder's Pohjola's Daughter, with its carefully tiered dynamics...makes a much stronger impression and so does the hauntingly atmospheric Oceanides, which rises to a powerful climax.

Elder seems fully in tune with the true essence of the [Symphony] and his orchestra plays it very well indeed...there are three admirable Sibelius performances here. The orchestral playing throughout matches the very high standards that we’ve come to expect from this team.

Under Elder’s nurturing aegis, the Hallé strings sound more enormous than ever in the slow movement, but they can scamper nimbly in the Vivacissimo scherzo...The cumulative power of the playing — and Elder’s certain grasp of the symphony’s architecture — builds to a powerful climax in this rapturously applauded live performance

The Hallé strings conjure up wonderful dark hues in the opening of Pohjola, and a silvery lightness to underpin the dancing woodwind in The Oceanides. Elder's approach to the symphony is a measured, slow-burning one. He's careful not to ratchet up the drama too early

Elder’s reading [of The Oceanides] is fabulous – the massive, crashing climax powerfully judged, the music on the edge of collapse for a few fleeting seconds...You’d buy this disc for the two tone poems...[the Symphony] isbrilliantly played, but it sounds a little too self-consciously epic and self-important.