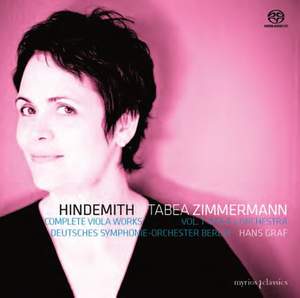 Zimmermann's first volume of a complete survey immediately takes its place among the very best, not least for the warmer, woodier tone that she produces and puts to such musically penetrating... — BBC Music Magazine, October 2013, 5 out of 5 stars More…

Tabea Zimmermann commemorates the 50th anniversary of death of Paul Hindemith with the recording of his complete works for viola. Hindemith is regarded as a key composer for the instrument and was a famous violist, himself, and who premiered the viola concertos by Darius Milhaud and William Walton.

The works recorded here in Vol. 1 include the viola concerto 'Der Schwanendreher' that Hindemith composed at the time when he faced massive agitation by the Nazis, as well as the intimate and touching 'Trauermusik' (Music of Mourning), written for the funeral of King George V. Besides these celebrated works, the album also includes two lesser known concertos: the 'Kammermusik No. 5' and the early edition of the 'Konzertmusik' Op. 48a in its world premiere recording.

Tabea Zimmermann has teamed up with exceptional musical partners: the Deutsches Symphonie-Orchester, Berlin, conducted by Hans Graf, who dedicate themselves to Hindemith’s legacy. A second volume will include the sonatas for solo viola and for viola and piano and will be released as a double album in Autumn 2013.

Zimmermann's first volume of a complete survey immediately takes its place among the very best, not least for the warmer, woodier tone that she produces and puts to such musically penetrating use.

Zimmermann plays it wholly convincingly, with her usual blend of formidable technique, sweetness and delicacy of tone and inner steel, finely supported by Graf and the DSO Berlin.

What immediately strikes the listener is how good the recording is...No praise is too high for the dedication perception and skills that Zimmermann, the Deutsches Symphonies-Orchester Berlin and Hans Graf have lavished on this marvellous music

a glorious surprise, near revelatory...There is a heartfelt passion and robust edge to Zimmermann’s playing which blows away the cobwebs and brings these works very much to life. Making a highly sympathetic partner the excellent DSO Berlin is warmly expressive and well detailed. Austrian conductor Hans Graf holds everything together with confidence.

Viola players have a lot to thank Hindemith for. Zimmermann marks the 50th anniversary of his death with this survey

Zimmerman’s playing in the later discarded slow movement is alone worth the price of admission: she spins a thread of golden tone in a beautiful cantilena, almost indistinguishable from the oboe that joins her halfway through… Myrios’s recording places the soloist in a believable balance that nevertheless allows every detail of Zimmermann’s playing to be clearly heard

Hindemith’s rarely heard Violin Concerto is dramatic, lyrical and accessible. ..The Sonata in C is the best of the lot – hearing Zimmermann and pianist Enrico Pace blast out the closing minutes of the final fugue is a profound, spiritually uplifting experience. Astonishingly vivid sound adds to the impact…