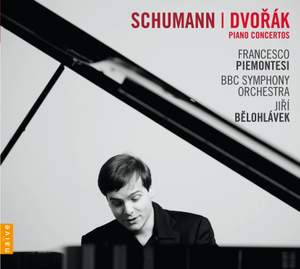 his performances in these two warm-hearted concertos amply display his pure-spirited, intelligent artistry...Piemontesi makes an even more satisfying impression when he lets his hair down a little. — BBC Music Magazine, August 2013, More…

New Naïve signing, Francesco Piemontesi, born in 1983, is one of today's most-watched pianists. His debut album on Naïve features the Schumann Piano Concerto and the original version of the Dvorák Piano Concerto, a work seldom performed due to its sheer technical difficulty. Conducted by Jiri Belohlávek with the BBC Symphony Orchestra, the album was recorded at BBC Maida Vale studios (Dvorák) and live in concert at the Barbican (Schumann) in December 2012 and continues the blossoming relationship between soloist, conductor and orchestra, begun in 2010, with Strauss’s 'Burleske'.

Piemontesi was voted Best Newcomer at the 2012 BBC Music Magazine Awards. In presenting his student with the award, Alfred Brendel praised “a young pianist with real talent, a pianist of natural poise and grace, of wonderful technical equipment, and of the ability to remind us what beautiful playing means: cantabile playing that is colourful, luminous and harmonious, without in the least lacking tension and atmosphere.”

Piemontesi has been a prize-winner at numerous international competitions including the Queen Elisabeth in Brussels, and in 2009 was awarded a Borletti-Buitoni Trust Fellowship as well as being named by the BBC as one of its New Generation Artists.

his performances in these two warm-hearted concertos amply display his pure-spirited, intelligent artistry...Piemontesi makes an even more satisfying impression when he lets his hair down a little.

Piemontesi benefits from a wonderfully realistic piano sound - too forwardly placed, some may think - which captures his creamy tone production and tapered phrase-ending to good effect... Listening to Piemontesi...makes you wonder if it isn't time the Dvorak gained a place in the regular concerto repertoire.

Piemontesi is a very gifted young player and his account of Schumann’s original masterpiece ranks highly- always intensely musical and respectful of the score, deeply felt, producing a performance that will give much pleasure

It’s a performance full of vivid imagery, refined lyric tracery and dancing rhythms. Some teasing pianistic rubati - faithfully followed by the conductor - ensure that nothing is metrical, and that the wind tapestry in particular sounds authentically Czech...If you are keen to hear the Dvořák original - or maybe it’s better to say ‘Original, mark II’ - then go for this Naive release which comes complete with excellent notes by Ludmila Smidová.

Schumann’s concerto never fails to enchant... and Piemontesi brings to it an exquisite lyricism

Piemontesi's crisp articulation is matched in the characterful playing of the BBC SO's clarinet, flute and oboe principals, the cadenza of the Schumann exquisite. Belohlávek's balancing of orchestra and soloist is near-ideal