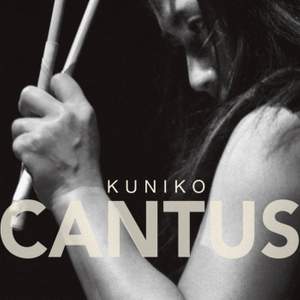 Kato has an impeccable sense of rhythm and a capacity for concentration — MusicWeb International, 22nd September 2013 More…

All three composers have consulted upon, and approved, KUNIKO’s arrangements on ‘cantus’.

The pieces are arranged for five octave marimba or vibraphone and each was chosen to fully demonstrate the colours, depth and dynamics of the instrument.

KUNIKO gave the world premiere performance of Reich’s New York Counterpoint version for marimba in New York in 2012. KUNIKO won praise from the composer himself who stated: 'Kuniko Kato is a first rate percussionist.’

The simplicity and beauty of Arvo Pärt’s music has won the composer many fans. In turn Pärt is a fan of KUNIKO’s arrangements having approved the new versions premiered on this album.

KUNIKO has arranged four of his best-loved pieces including Cantus, a fitting tribute to Benjamin Britten in 2013, his 100th anniversary year.

Purl Ground is an original piece written by British composer Hywel Davies, which KUNIKO premiered at the Cheltenham Festival in 2011 to critical acclaim. The piece is arranged for solo marimba and makes excellent use of both tremolo and pianissimo effects.

KUNIKO is a soloist who is recognised around the world as one of the most gifted and significant percussionists of her generation in today’s contemporary and classical music scene.

The art of transcription flourishes in these imaginative reworkings of classics by Arvo Pärt and Steve Reich in the hands of a master marimba player...an absorbing recital.

a remarkable disc, and a triumph of adventurous musicianship. Hypnotic and cooling too.

The Independent on Sunday 28th July 2013

Kato completes her survey of Steve Reich's counterpoint pieces with "New York Counterpoint", arranged for the marimba with his blessing. Reich's intricate rhythms are what catch the ear, but it's the overtones and silences that mesmerise in Arvo Pärt'