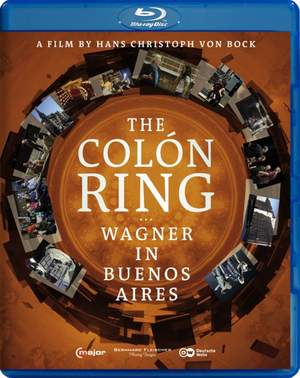 unflinchingly honest in outlining the twists and turns of the production’s development and is fascinating to watch. Highly recommended. — Opera Now, 5 out of 5 stars

Is it really possible to stage Wagner’s Ring on a single day? The composer’s great-granddaughter, Katharina Wagner, who now runs the Bayreuth Festival, was keen to stage Cord Garben‘s abridged version of the cycle at the Teatro Colón in Buenos Aires, but in the event things turned out rather differently.

When she and her team arrived at the Colón, they found that the rehearsal conditions were not what they were expecting, and so she decided that the task should be entrusted to a different director. Valentina Carrasco took over at short notice and together with the singers and the set and costume designers she staged the Ring in a seven-hour version never previously seen and all on a single day!

The documentary provides a thrilling and visually memorable account of the long journey taken by this version from its inception to the first night.

unflinchingly honest in outlining the twists and turns of the production’s development and is fascinating to watch. Highly recommended.